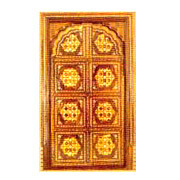 This door is a reproduction of the doors belonging to the rajputana havelis in the reign of raja todarmal (one of the nine gems in the court of emperor akbar) in jaipur, rajasthan. The rajputs were a rich clan in both tradition and history. Honour was a matter of pride and they would lay down their life for it. The rajput chieftains were spread over vast tracts of desert land and had to do with what little water resources they could muster. thus the houses were built around oasis / fresh water springs in the desert. This group housing were called havelis (mini palaces) which housed the chieftains family and also those of his subordinates and servants. The haveli was built like a fortress with huge thick walls and ramparts to see the enemy from far and mount a counter attack. the mahadwara of the haveli was set into a stone frame and was of double thickness, having embellishments of brass and iron to give both beauty and strength. The pointed brass studs thwarted attacks from enemy elephants who were used to push open the doors. the umbro or frame was made of marble and inlaid with precious stones and gems. The shutters were made of sheesham (rosewood), carved and inlaid with brass. They had metal plates and iron reinforcements supported with iron hinges and tower bolts. A solid wooden beam, the width of doorway was placed in between to lock the doors at night. the pattern of inlay work was similar to the design of rangoli, an ancient form of drawing on the floor – geometric design to enhance the vastu of the home and add colour to the festivities. The doors were so heavy, that they were operated by their dwarapalakas. the ancient rajasthani art has almost died out due to non-availability of natural wood and increasing cost of labour. 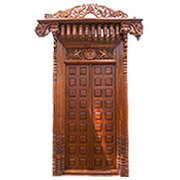 This door consists of the shutter, frame, overlay, half pillar, top panel, canopy, overhang and the crown panel. The door shutter consists of 36 panels, which are plain. The frame and overlay are moulded and simple. The half pillars are carved at the base and have corbels at the top in the shape of parrots. The canopy has banana flowers hanging from it signifying prosperity. The canopy holds the top crown, which is intricately carved with designs of elephants and creepers. The top panel consists of floral work, elephant and lions. This door can be made to order in any size and the designs can be changed to match the requirement of the customer. The finish of the door is in Natural Matt polyurethane coating.

This door is a reproduction of the doors of the royal chettinad palace in the south arcot district of tamil nadu. The chieftains of this area were known as chettiars and were also known as the trader princes of the pallava kings. The chettinad houses used to be built in temple style with the house having a central courtyard containing a mini pond, tress of banyan, tamarind & neem, and large corridors connecting different room looking out on to the courtyard. The tiled corridors were supported on solid wooden rafters resting on huge intricately carved wooden pillars. The main door as the most beautiful one with a lot of embellishment and pomp. The door used to be made mostly of neem and mango, as this was considered auspicious for the inhabitants of the house. The structure consisted of three parts namely, the vasapadi (frame), kadavu (shutter) & alankaram (top panel and overlay). The frame was solid timber and was as big as the beams that were used to support the house. The doors were of double thickness supported by clasps of iron mounted on solid pins and adorned with pointed panchaloha studs to protect the door from attack of enemy elephants. The top panel housed the mantap, which contained the kalash or deity of the house. The base of the mantap was surrounded by annams (swans) on the bottom tier, the kamadhenu (holy cow of the gods) on the second tier – blessing the household with plentiful of happiness, the annapakshi (bird of prosperity) on the top most tier, below an over hang of creepers and pillar sections (bodhi) symbolizing the strength of the clan. It is believed that during the famine of vaigai river, the landlords used to employ labour to make these doors in exchange for morsels of food. The artisans of this traditional craft have almost but vanished due to lack of patrons. 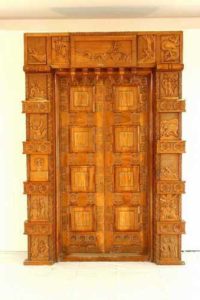 This door contains the Krishna Katha (biography) of the mythological God Bhagavan Shri Krishna of the Yadava Clan from his birth to time he attained maturity. The frame has the important episodes in chronological order, clockwise left to right.